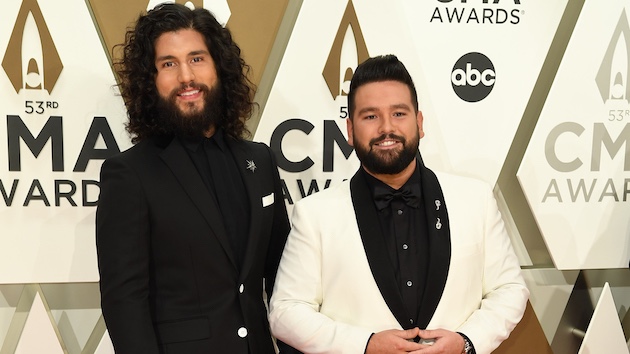 While stranded inside during an ice storm, Dan + Shay filmed a video for a fan’s wedding request

ABC/Image Group LADan + Shay had some time to kill this week while stuck inside waiting for the roads to clear, after Nashville — and much of the rest of the country — got hit by a powerful snow and ice storm.

During their down time, the duo decided to spread some positivity to their fan base the best way they know how: through music.

“We get a lot of messages about wedding shout-outs and performances, and we try to do as many as we possibly can,” Dan + Shay explained on Instagram. “The other day (pre-ice storm), a fan asked if we could sing a bit of ‘My Side of the Fence’ for their wedding, so we filmed a chorus on our phone. Figured since we’re stuck at our houses until the roads are cleared, we might as well post it here for anyone else who has been asking about this song.”

“My Side of the Fence” is an album track from Dan + Shay’s self-titled third studio album, which arrived in 2018. In their performance, Dan Smyers and Shay Mooney harmonize their way through the chorus, accompanied by Dan’s acoustic guitar.

That guitar, they add in the video’s caption, has some major Dan + Shay history associated with it.

“Tequila [was] written on the guitar (it was a gift and actually sounds better than any of my other guitars, lol),” they explain, going on to poke fun at themselves for the messy hair and sweatpants that they’re sporting in the video. “We’re basically fashion icons.

During the same ice storm, Dan + Shay tweeted a snippet of their hit “I Should Probably Go to Bed” reworked as “I Should Probably Buy a Sled,” along with a video of people trying, unsuccessfully, to use various items as makeshift sleds.

i should probably buy a sled 🛷 pic.twitter.com/a5jvW0Ca36