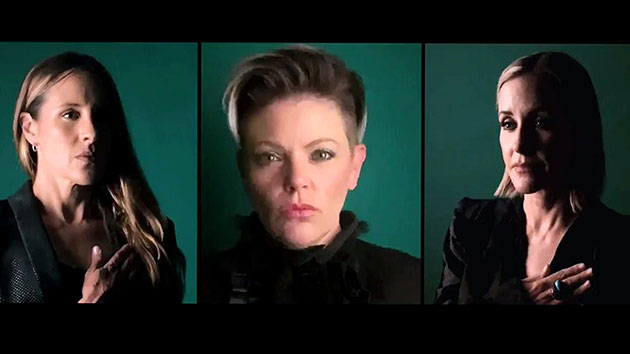 The Chicks reflect on how freeing it was to change their name: "That needed to happen for quite some time"

DNCC via Getty ImagesThe Chicks left no stone unturned during a recent interview on Apple Music’s Essentials Radio — especially when it came to discussing why they walked away from being called The Dixie Chicks.

The “Landslide” singers — comprised of members Emily Robison, Natalie Maines and Martie Maguire — changed the group’s name in June 2020, during the height of the Black Lives Matter protests.

Maguire reflected on facing pressure over the past several years to drop “Dixie” from their names due to the word’s affiliation with the antebellum South.

“That needed to happen for quite some time,” she admitted. “With George Floyd‘s murder and everything that started happening with Black Lives Matter, we were like, ‘Oh my God. We got to do this and do this as soon as possible.”

Maguire revealed how they arrived at “The Chicks,” saying the name came up during a virtual brainstorming session.

“We had a really funny management Zoom call where we were throwing out ridiculous names and it just came back to… ‘Okay, the most obvious thing is The Chicks,'” she revealed, noting they contacted their legal team to get the name change started once everyone was in agreement over their new moniker.

Maines added that rebranding the 12-time Grammy winning band was unexpectedly freeing for them, adding, “You didn’t even know you were carrying that weight until it was gone.”

With a laugh, Maines also noted that changing their name to The Chicks was eye opening for them, telling Apple Music, “That’s a way cooler name. What [were] we so scared of?”