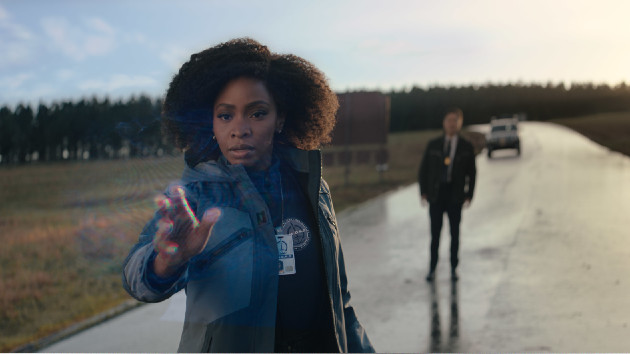 Photo Courtesy of Marvel Studios(NEW YORK) — Teyonah Parris says the wild, unpredictable ride that fans are currently on with Disney+’s WandaVision is far from over.

After the Halloween-themed episode — which ended in Wanda expanding the boundary of Westview — Parris, who plays S.W.O.R.D. Captain Monica Rambeau, says Wanda’s explosive reaction to Vision being hurt is just the tip of the iceberg.

“I think that, yes, we have so much more to share with you all,” Parris tells ABC Audio. “I think that you will not be disappointed.”

“The creative team has done just such a wonderful job of laying everything out and teasing it out in just these very epic moments,” she continues. “Even like the very last episode where Wanda expands the hex. I was in the living room like, ‘Oh my gosh, what is she doing? She’s not playing!'”

Parris promises that there will be “more moments like that to come.”

“And I do think you guys will be very satisfied with the outcome,” she teases.

Not to ignore the elephant in the room, Parris also confirms that WandaVision is “setting up many things” in the Marvel Cinematic Universe.

“One of which we already know and was announced that Monica will be moving on to Captain Marvel 2 to join Carol Danvers — Captain Marvel, and Kamala Khan — Ms. Marvel,” she says. “So there’s definitely some setup happening there.”