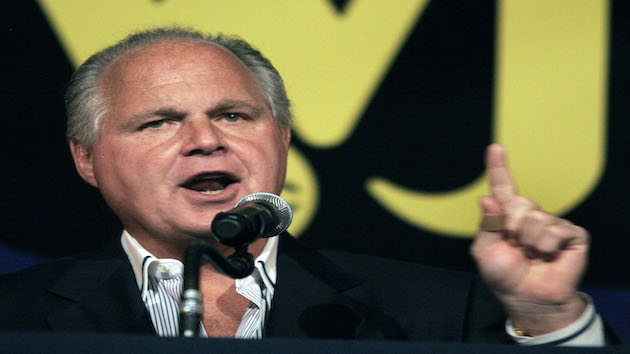 (NEW YORK) — Rush Limbaugh, a colossal figure whose unflinching brashness helped shape American conservative politics and media while his history of derogatory comments about marginalized communities turned him into one of the country’s most polarizing names, has died. He was 70.

He announced in early February 2020 that he was fighting advanced lung cancer. His diagnosis was met with well wishes from many prominent Republican figures and appeared to prompt then-President Donald Trump to present him with the Presidential Medal of Freedom at the 2020 State of the Union address on Feb. 4, a day after he revealed his diagnosis on air.

The honor stirred conversation among Democrats and members of and advocates for marginalized communities because of Limbaugh’s long history of making disparaging comments about minority groups, the LGBTQ community, suicide, AIDS patients and women.

The divisive reaction was emblematic of Limbaugh’s legacy.

Gov. Mike Huckabee, R-Ark., called it a “powerful moment” on Twitter, with conservative TV personality Meghan McCain saying that those on the right most likely applauded it.

“He’s completely changed the paradigm of radio,” McCain said on “The View,” when asked by co-host Whoopi Goldberg what Limbaugh had done to deserve the honor.

Those on the other side of the political divide argued otherwise.

Joe Biden, then months away from being elected president, condemned Trump in a statement for presenting the award to Limbaugh, whom he called “a conservative media personality who has done as much as Trump himself to divide our nation.”

Trump, during an interview on Fox News on Wednesday, called Limbaugh a “fighter,” adding: “I mean he, in theory, could have been gone four months ago, really. He was fighting until the very end. He was a fighter.”

Beginning a career in radio in 1971, Limbaugh became known for his conservative opinions and views on immigration, women’s rights and race. He launched “The Rush Limbaugh Show” in 1988 and steadily remained among the most influential radio show hosts, as determined by Talkers magazine.

Limbaugh’s presence in talk radio effectively changed the course of the industry, and he’s often been credited with saving AM radio. When he first launched his show, he offered a new kind of talk show that many hadn’t heard before, according to Brian Rosenwald, a scholar at the University of Pennsylvania whose research focus includes media studies and Limbaugh himself.

The status quo prior to Limbaugh mainly consisted of hosts conducting interviews or hearing from callers, rarely letting their own opinions and values seep into the conversation, according to Rosenwald. Yet Limbaugh proudly shared his opinions and garnered a loyal fanbase.

“He’s doing something that people had never heard,” Rosenwald told ABC News. “He starts to feel a responsibility as he starts getting all these callers saying, ‘Thank God, Rush, you’re finally on air. We finally have a voice.'”

“The Rush Limbaugh Show” continued for over three decades, although Limbaugh took a break from his show in 2003 after admitting an addiction to painkillers and a stint in rehab. Limbaugh was then arrested in 2006 after a three-year investigation that resulted in a warrant charging him with fraud to conceal information to obtain prescriptions, according to reports at the time.

Limbaugh’s attorney said he had reached a deal with prosecutors to have the charges eventually dismissed if he continued treatment for drug addiction. Though it was never proved, some speculated that Limbaugh’s addiction may have led to an autoimmune inner ear disease that caused him profound deafness between October 2001 and January 2002. He regained hearing through the use of cochlear implants.

Limbaugh was outspoken about the punishment he thought those struggling with addiction should face before he announced his own addiction.

“It’s destructive, it’s demoralizing and the people who are caught doing this stuff ought to be sent away. They ought to be punished,” Limbaugh said during a show.

Even after his own announcement, he wanted little sympathy, telling listeners, “I refuse to let anyone think I am doing something great here, when there are people you never hear about who face long odds and never resort to such escapes.”

As much as people on the right see Limbaugh as a hero who gave conservatives a voice, Rosenwald said, those on the left will remember him as “a hate-mongering bigot who said a lot of awful things” and “reinforced prejudices.”

Among the comments that generated controversy, Limbaugh in 2007 described the NFL as “a game between the Bloods and the Crips without any weapons,” effectively comparing Black professional football players to gang members.

In 2012, he called Sandra Fluke, then a Georgetown University law student, a “slut” after she argued to Congress that birth control should be covered by her employer’s health care plan.

He later apologized to Fluke and said his “choice of words was not the best,” although he had made the claim in various forms multiple times.

A year later, he said on his talk show that white people should stop feeling guilty about slavery.

“If any race of people should not have guilt about slavery, it’s Caucasians. The white race has probably had fewer slaves and for a briefer period of time than any other in the history of the world,” he said, calling his statement as a “history lesson.”

Of the LGBTQ community, Limbaugh blamed gay marriage for a decline in Christianity in 2015.

“Many of these churches now perform homosexual marriage, they ordain gay pastors or ministers, and, in some cases, female and lesbian pastors and ministers, which you might think would cause some people to leave those churches,” he said on his talk show.

All considered, Rosenwald said no matter what the public thinks of Limbaugh, his impact in both politics and media can’t be overstated.

In 25 years, Limbaugh helped raise nearly $44 million for the Leukemia & Lymphoma Society, according to the health agency. He also ran a campaign for the Stephen Siller Tunnel to Towers Foundation, which supports first responders and the military, after former NFL player Colin Kaepernick criticized a Nike shoe featuring the Betsy Ross flag.

Limbaugh has held friendly and even close relationships with numerous Republican presidents and politicians, including George H.W. Bush and George W. Bush.

In 1992, Limbaugh was invited to stay overnight at the White House by the elder Bush. In 2008, George H.W. Bush, George W. Bush and Jeb Bush all called in to his show to congratulate him on his 20th anniversary.

“President George W. Bush calling to congratulate you on 20 years of important and excellent broadcasting,” Bush said over the phone to Limbaugh. “I’m here with a room full of admirers, there’s two others … people who consider you friends.”

However, when Barack Obama was president, Limbaugh launched numerous attacks against him, including saying he wasn’t a U.S. citizen, that Obama was “an angry Black guy” and that his “entire economic program is reparations.”

He also called Obama “Barack, The Magic Negro” numerous times, a term that was run in a Los Angeles Times op-ed that later was made into a song to the tune of “Puff the Magic Dragon.”

Limbaugh later defended his usage of the name, saying he did not come up with it and that it was satire, before playing an entire song that referred to Obama as such.

Limbaugh’s brash style of “infotainment” — a mix of facts and performance — in part led to the style often attributed to Fox News, according to Rosenwald.

“Fox News is a thing because of him,” Rosenwald said.

His prominence in conservative media and politics meshed well with the Trump era, with Limbaugh predicting the mainstream media would not understand the desire for Trump.

Limbaugh understood the impact Trump could have in part because, like Limbaugh himself, Trump “never put his tail between his legs,” according to Rosenwald.

Limbaugh is survived by his wife, Kathryn.