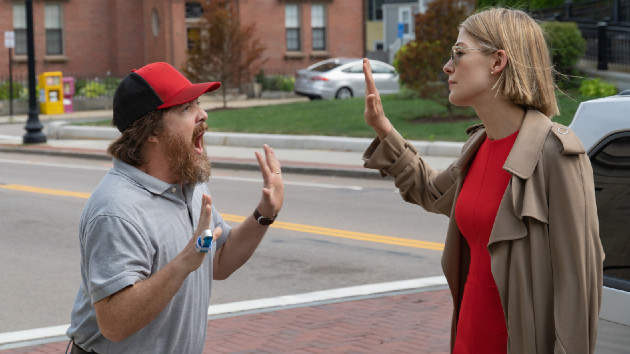 Seacia Pavao / Netflix(NEW YORK) — Rosamund Pike says she felt a sense of freedom in her I Care a Lot role as Marla Grayson, a calculating entrepreneur who turns her business as a legal guardian into a successful scheme to cheat seniors out of their life savings.

“I think I’ve played some really wonderful women in the last few years…  sort of soulful, admirable, courageous, morally, like, centered women,” Pike tells ABC Audio. “And so to kind of escape from that and not have the burden of such greatness on my shoulders was actually quite liberating.”

Pike, who received a Golden Globe nomination for her icy portrayal, says getting to “play outside of the constraints of niceness and goodness and morality” was actually quite “fun.”

“I mean, it’s escapism of a different sort,” she explains.

While the actress admits the film does shed light on a horrific aspect of the guardianship industry, Pike still believes viewers will find the humor in her devilish character’s behavior.

“I think people will laugh. I think people [will] laugh very uncomfortably at this film,” she says. “It’s darkly funny. It’s a dark satire. It’s appalling in its humor. But you have to laugh because if you didn’t laugh, it would be too tragic, you know?”

In fact, Pike is banking on the fact that those who loved her in 2014’s Gone Girl — as the cunning Amy Dunne — will come back to support her once again.

“I do like working in this space and I’m hoping that a lot of the same audience who really sort of gravitated towards Gone Girl will find something in this film that they really relish again,” she adds.