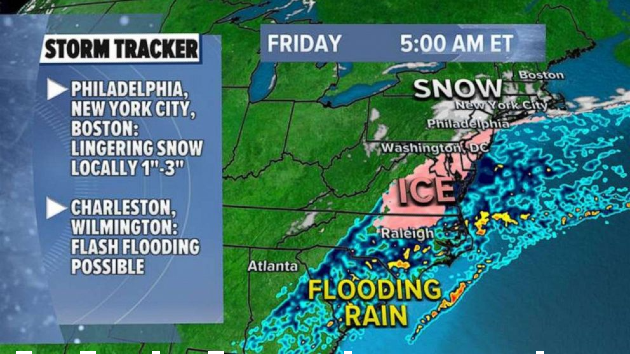 (NEW YORK) — An icy blast is stretching from Dallas to New York City Friday morning — but warmth is finally on the horizon for the South.

Friday’s storm focuses on the East Coast, with flooding rain in the Carolinas, an icy mix in the mid-Atlantic and snow from New Jersey to Massachusetts.

Philadelphia, New York and Boston could see 1 to 3 more inches of snow.

The snow and ice will begin to move out Friday night.

Meanwhile, a hard freeze warning is in effect in Texas, Arkansas, Louisiana and Mississippi, where temperatures are in the teens and 20’s Friday morning.

The freeze will finally lift Friday afternoon and the South is expected to see temperatures rise to the 50’s and 60’s this weekend.

After a week of historic and disastrous snow and ice in the South, over 180,000 customers are still without power in Texas and over 111,000 are in the dark in Mississippi Friday morning.

Most of Jackson, Mississippi, is currently without water and city officials say there’s no timeline on when it will be restored.

“We do not have a definitive timeline as to when the water will be restored in the tanks,” Jackson Mayor Chokwe Antar Lumumba said during a news conference Thursday.

The city will begin water distribution at several sites Friday.