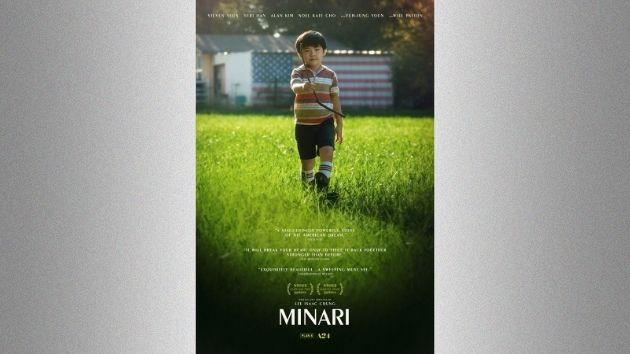 How 'Minari' flips the perspective about Asian families in the US

Courtesy of A24(LOS ANGELES) — The film Minari is getting a lot of buzz this awards season — some saying it has a very good chance of winning some gold at the Oscars. Star Steven Yeun was nominated for best actor at the Screen Actors Guild Awards, and he tells ABC Audio the script went far deeper than most roles he sees for Asian men in Hollywood.

“Usually I read stories from that point of view and they’re oftentimes still trying to explain itself or justify itself through something outside,” he explains. “But this one was just a story of this family and it really mirrored something that I connected to deeply so.”

Minari, which is about a Korean-American family moving to the south to start a farm, is based on the early life of its writer and director Lee Isaac Chung, who shares that he really wanted to flip the perspective of most stories you see about Asian families in the U.S.

“For me and my family growing up, we weren’t the foreigners. You know, we we were Coloradans moving to Arkansas and we had our contained world in our trailer home,” he says. “And any time we stepped outside, we’re dealing with the other and those are the people in our community. So there’s a shift in perspective there that I was kind of working with what it was like to be us.”

In addition to Minari‘s buzz, co-star Yuh-Jung Youn was nominated for Best Supporting Actress at the Screen Actors Guild Awards, a moment she described as “unreal.”

“It’s unreal to me. I’m not a Hollywood actress,” she says. “Hopefully people will just enjoy this movie.”