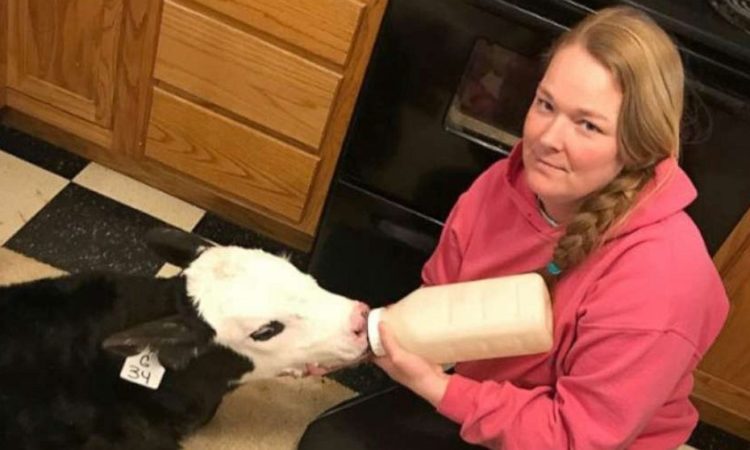 (HUNTSVILLE, Ark.) — The bitter cold of the past two weeks has imposed a unique burden on Megan and Kenny Harris, who own a farm in Huntsville, Arkansas: Calves now roam their kitchen.

The couple raise 280 head of cattle and it is now calving season. They have had 47 newborns during this cold snap and expect another 95 in the coming weeks. Some of the fragile calves, born in temperatures that have ranged from well below zero at night to just over 10 degrees in recent days, were at immediate risk of freezing.

Without a large enough barn or heat to shelter all the new arrivals, the calves moved into the Harris’ home. Over the 10 days, they have brought 15 calves into their home, as many as seven at a time, penned mostly in the kitchen. Some have been able to get back to their mothers in a day.

But a handful of weaker ones have been in the house for as long as a week.

“It’s been so cold,” said Megan Harris. “I couldn’t just send them back out there like that. They were just weaker than the other ones.”

She spent Saturday saving a newborn.

“When he was born, his mom had him in the snow. So he was about froze,” she said. She warmed him and fed him a substitute for colostrum, the first milk his mother would have given him. “I’ve spent my morning trying to bring him back to life.”

She was successful. “Now I got him standing up,” she added.

Still, the cold has killed seven calves and Kenny Harris is convinced that “had we not brought in those 15 over the past few weeks, we’d have 22 dead.”

Having a mini-herd in your home isn’t all that different from child care, Megan Harris explained.

“They get their bottles three times a day,” she said. And, since diapers aren’t an option, “you just follow them around and you keep cleaning up after them. At first, they’ll kind of stay where they are supposed to. But as I get them feeling better, they’re up and wandering around and mooing at me.”

But keeping all their animals alive in these conditions adds substantial expense to the Harris’ livestock livelihood. Kenny Harris said the extra hay, fuel and feed needed because of the cold has added $2,500 to their already high costs and low margins. Not to mention the added exhaustion.

“It’s work daylight till dark,” he said. With his cattle spread out on nearby farms, he is in constant motion, “cutting ice two or three times a day because they can’t get water,” and delivering hay and feed for the animals “’cause that’s the only way they can make heat.”

The Harrises know their method for rescuing calves from the cold is limited to smaller operations like theirs, but see it as a necessary custom.

“I was raised doing it,” Kenny Harris said. He added, “It don’t matter if it’s gonna cost us money, we’re still gonna do it to try to keep everything going.”

Kenny Harris heaved a sigh of relief when asked about the forecast for next week, which calls for warmer temperatures.

“We just need the snow and ice to leave and then we’ll be all right,” he said.