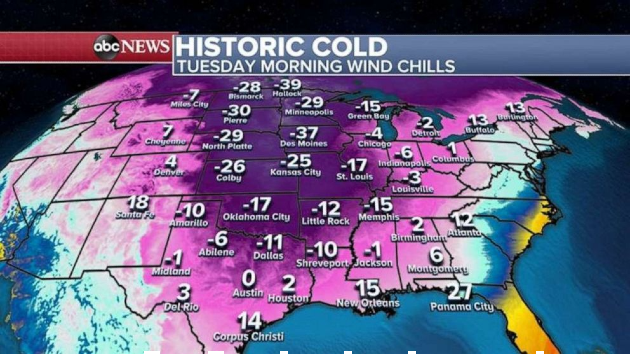 The South is still digging out from snow and ice that hit earlier this week, closing vaccination sites and bringing roads to a standstill — but a second storm is closing in.

That same storm is moving through the Northeast Tuesday with ice and snow for inland areas and just mild rain for the Interstate-95 corridor.

Additional snow and ice will hit northern New England where 6 to 10 inches of snow is possible through Tuesday afternoon.

Meanwhile, a record-breaking cold snap is slamming the central U.S.

The wind chill — what it feels like — plunged Tuesday morning to minus 12 degrees in Little Rock, Arkansas, minus 11 degrees in Dallas, minus 15 degrees in Memphis, Tennessee and 0 degrees in Austin, Texas.

Early Wednesday morning, a second storm will move into the South, including Dallas, Oklahoma City and Little Rock, bringing more snow and ice.

Three to six inches of snowfall is possible for northern Texas, Oklahoma and Arkansas.

Freezing rain and sleet is expected to extend from Dallas to Shreveport, Louisiana, to North Carolina and into Virginia.

By Thursday afternoon and evening, this new storm will reach the Mid-Atlantic and the Northeast with ice, snow and heavy rain.

The Interstate-95 corridor from Washington, D.C., to New York to Boston could see three to six inches of snow before the snow changes to rain.