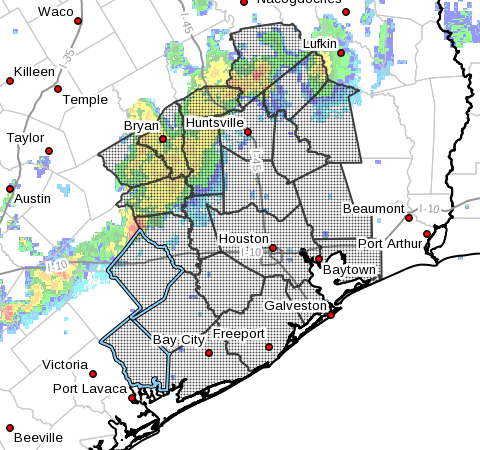 Tropical Depression Harvey has not moved much today but is expected
to strengthen as it moves NW towards the Texas Coast. TD Harvey is
expected to continue to strengthen into a tropical storm or hurricane
during the next couple of days. The primary impact from Harvey remains
heavy rainfall and subsequent flooding, but there will still be a
threat for tropical storm to hurricane force winds and storm surge
along the coast. The most likely arrival time for Tropical Storm force
winds to reach the Upper Texas Coast is during the day on Friday.
Harvey is forecast to remain somewhere in the vicinity of S to SE Texas
through the weekend and will continue to pose a heavy rainfall and
flooding threat into early next week. Coastal flooding will likely be
an ongoing issue Friday through the weekend as tides will remain
elevated.

Elsewhere across Southeast Texas, little to no impact is anticipated.

If you are exceptionally vulnerable to wind or water hazards from
tropical systems, consider voluntary evacuation, especially if being
officially recommended. Relocate to a predetermined shelter or safe
destination.

If evacuating away from the area or relocating to a nearby shelter,
leave early before weather conditions become hazardous.

When making safety and preparedness decisions, do not focus on the
exact forecast track as there are inherent forecast uncertainties
which must be taken into account.

If you live in a place that is particularly vulnerable to high wind,
such as a mobile home, an upper floor of a high rise building, or on
a boat, plan to move to safe shelter. Take enough supplies for you
and your family for several days.

If you live in a place particularly vulnerable to flooding, such as
near the ocean or a large inland lake, in a low lying or poor
drainage area, in a valley or canyon, or near an already swollen
river, plan to move to safe shelter on higher ground

Always heed the advice of local officials and comply with any orders
that are issued. Do not needlessly jeopardize your life or the lives
of others.

When securing your property, outside preparations should be conducted
as soon as possible before conditions deteriorate. The onset of
strong gusty winds and heavy rain can cause certain preparedness
activities to become unsafe.

Be sure to let friends and other family members know of your
intentions and whereabouts for surviving the storm. For emergency
purposes, have someone located away from the threatened area serve as
your point of contact. Share vital contact information with others.
Keep cell phones handy and well charged.

Be a Good Samaritan and check on those who may not be fully aware of
the situation or who are unable to make personal preparations.

Visitors to the area should become familiar with nearby surroundings.
If you are a visitor, know the name of the county or parish in which
you are located and where it is relative to current watches and
warnings. If staying at a hotel, ask the management staff about their
onsite disaster plan. Listen for evacuation orders, especially
pertaining to area visitors.

The next local statement will be issued by the National Weather
Service in Houston/Galveston TX around 430 AM CDT, or sooner if
conditions warrant.